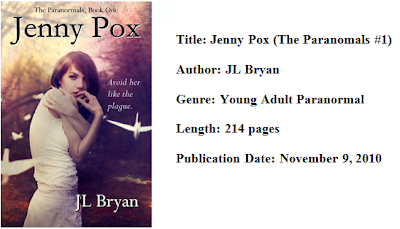 Jenny’s touch spreads a deadly supernatural plague. She can’t control her power, so she devotes her life to avoiding contact with other people in her small Southern town. Her senior year of high school, she meets the one boy she can touch…but if she’s going to be with him, Jenny must learn to use the horrific power inside her to survive his devious, manipulative girlfriend, who secretly wields the most dangerous power of all.

REVIEW
First, let me just say this book is not for the faint of heart, the weak stomached, or anyone under the age of eighteen. And I loved every page of it. I was a little hesitant about Jenny Pox initially, but decided to give it a try. And while the gory descriptions of the Jenny Pox tried my gag reflex, it was well worth the $2.99 price tag.
I thought I might have difficulty connecting to Jenny in the beginning (she’s just a little more country than I was prepared to handle with her perpetual use of the word aint’t) but it didn’t take long to fall under her spell. Maybe I didn’t quite feel Jenny’s pain (how could I possibly?), but I empathized. JL Bryan painted an image of a life so lonely and isolated that Jenny was unable to even pet her own dog without killing him. When I think of all the conscious and unconscious contact I go through in a single day, it’s inconceivable to go one day, let alone a lifetime, without a hug, a hand to hold, or a shoulder to lean on. And even though Jenny’s touch was lethal, she was the underdog. Always an outcast, always a loser, it was impossible not to want to see her triumph over a small town determined to see her beat down.
When Jenny meets Seth, the only person in the world she can safely touch, you just know they’re meant to be together, two parts of the same whole. Soul mates even. Too bad Seth’s girlfriend Ashleigh has different plans. And Ashleigh’s not exactly the kind of girl who’s used to hearing the word ‘no’. As Jenny struggles to find the courage to pursue a relationship with Seth and her own happiness, it quickly becomes apparent that Ashleigh will stop at nothing to get what she wants. (This is where the manipulation, gratuitous sex, and all out evil come into play. But I’ll let you find out about that for yourself!) While I loved the paranormal aspect of the book and the uniqueness of the story, what I enjoyed most was watching Jenny grow from sheltered and insecure to a strong and confident young woman willing to fight for what she wants.
This book has it all: teen angst, young love, insurmountable odds, sex, death, revenge. All set perfectly in the heart of small town America. You name it, JL Bryan’s worked it in. And work it does. I can’t wait to get my hands on book two, Tommy Nightmare! What can I say? I’m a sucker for indie writers. And underdogs.