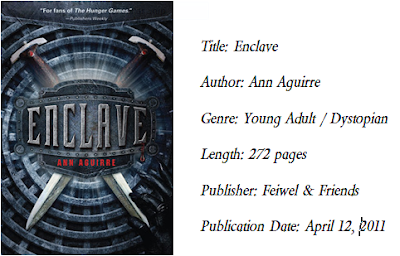 WELCOME TO THE APOCALYPSE

In Deuce’s world, people earn the right to a name only if they survive their first fifteen years. By that point, each unnamed ‘brat’ has trained into one of three groups-Breeders, Builders, or Hunters, identifiable by the number of scars they bear on their arms. Deuce has wanted to be a Huntress for as long as she can remember.

As a Huntress, her purpose is clear–to brave the dangerous tunnels outside the enclave and bring back meat to feed the group while evading ferocious monsters known as Freaks. She’s worked toward this goal her whole life, and nothing’s going to stop her, not even a beautiful, brooding Hunter named Fade. When the mysterious boy becomes her partner, Deuce’s troubles are just beginning.

Down below, deviation from the rules is punished swiftly and harshly, and Fade doesn’t like following orders. At first she thinks he’s crazy, but as death stalks their sanctuary, and it becomes clear the elders don’t always know best, Deuce wonders if Fade might be telling the truth. Her partner confuses her; she’s never known a boy like him before, as prone to touching her gently as using his knives with feral grace.

As Deuce’s perception shifts, so does the balance in the constant battle for survival. The mindless Freaks, once considered a threat only due to their sheer numbers, show signs of cunning and strategy… but the elders refuse to heed any warnings. Despite imminent disaster, the enclave puts their faith in strictures and sacrifice instead. No matter how she tries, Deuce cannot stem the dark tide that carries her far from the only world she’s ever known.

REVIEW
Talk about a diamond in the rough. I never would have picked up this book if another blogger hadn’t recommended it. Why? Mostly, I think, because the cover didn’t really catch my eye and the title didn’t mean much to me either. Truth be told, without reading the book jacket, it put me in mind of the sci-fi/fantasy books my husband reads. I was sooo wrong. This book was amazing! I don’t give 5 stars often, but Aguirre definitely got my blood pumping. I didn’t have high expectations going in, and maybe that’s one reason I rated it so highly. There’s nothing worse than having a book built up in your mind so much before reading it that it’s impossible for said book to live up to your expectations.
Either way, I couldn’t put this book down. I downloaded it on my kindle the morning I was leaving Mexico and when I didn’t stop reading until it was done. (My family probably thought I was being anti-social in the extreme!) I read on the bench out front the resort, in the shuttle to the airport, on the plane, in baggage claim… You get the idea. The only place I didn’t read was in Customs because they frown on the use of electronic devices.
This was my first read by Aguirre and it won’t be my last. The word building was amazing, there was plenty of action, and I could easily relate to the heroine, Deuce. I was literally sucked into Deuce’s world from page one. I found myself wanting her to challenge the status quo and question the Elders despite the obvious conclusion that she would be exiled for independent thought. I felt her pain when she truly saw the corruption on which her society was built and felt the sting of betrayal when even her closest friends turned against her. I was even hopeful as she and Fade stepped above ground and went Topside in search of a land free of Freaks.
Deuce was a strong character and, despite the compassionate streak she kept hidden within the Enclave, it was clear how deeply her Huntress training had affected her. Forced to question everything she’d ever been taught, I found myself anxious to see her grow a person. I knew who she was, but I wanted to see who she’d become. Life underground was a little two dimensional and it felt like (as with any adolescent), Deuce had a lot more living to do before she’d be whole. Although she’d been raised to live by the sword and had little formal education, she was a thoughtful character who proved that she could shift her initial perceptions and change.
Now, to be fair, there were some things I didn’t exactly like, although I understood them. (Spoiler alert!) It drove me crazy that Deuce didn’t really understand Fade’s attraction to her or the thinly veiled meaning in his words at times. Yes, I understand that she came from a world where breeding was simply a means of species proliferation and she didn’t have any experience with emotional ties and loving relationships. But it still drove me crazy in the ‘How-oblivious-can-you-be-?-You-two-need-to-get-together-already-!’ kind of way. (Apparently I’m a romantic at heart.)
Also, I really hated that Stalker (former gang leader / probable rapist) was folded into their little band of survivors. While I understood Deuce’s reluctance to leave him behind and the practicality of having another skilled fighter to face the Freaks, it still burned. I tried to remind myself that, like Deuce, he only knew one way to survive in the world and that he needed to be shown a different way, but it didn’t really help.
I probably wouldn’t have enjoyed this book half as much if I weren’t so emotionally invested in the characters and the outcome, so I guess that even though they drove me a little crazy, I can’t wait for book two of the Razorland series, Outpost, which is projected for release in Fall 2012.

J.J. Bonds is an independent author who writes Young Adult Paranormal Romance & Urban Fantasy. She is the author of the bestselling Crossroads Academy series. J.J. lives in Carlisle, Pennsylvania where her obsession with all things paranormal keeps life interesting. She lives with her husband, daughter, and one rambunctious K9. Loves Buffy, Mexican food, and zombies. Sings off-key.