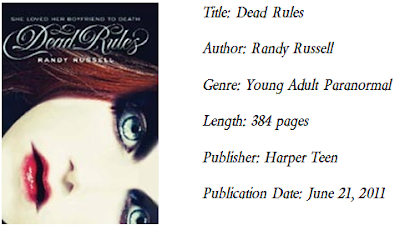 Jana Webster and Michael Haynes were in love. They were destined to be together forever.
Do

But Jana’s destiny was fatally flawed. And now she’s in Dead School, where Mars Dreamcote lurks in the back of the classroom, with his beguiling blue eyes, mysterious smile, and irresistibly warm touch.

Michael and Jana were incomplete without each other. There was no room for Mars in Jana’s life—or death—story. Jana was sure Michael would rush to her side soon.

But things aren’t going according to Jana’s plan. So Jana decides to do whatever it takes to make her dreams come true—no matter what rules she has to break.

REVIEW
Let me start by saying that Dead Rules had such amazing potential. I read a pre-launch interview with Russell and put this on my TBR list immediately. Between the blurb and the author interview, I was sure this was a book for me. I logged on to Amazon and downloaded it on my Kindle (at my own expense) within days of the release. My expectations? Fresh, witty, imaginative. And it was most of those things, but there were still some things that really irked me.
But let me start with the good stuff. The concept was original and well thought out. Although Dead School was a little confusing initially (by design), it all came together in the first couple of chapters. I loved the idea that it was located right here on planet Earth, but could only really be seen and experienced by the dead. I also liked the idea that the students had to figure things out for themselves and that the rules were cryptic. That’s what real life is like, so why should death be any different? And for the romantic in me, the budding relationship between Jana and Mars was the one thing that really hooked me and kept me reading. I felt more connected to Mars than any other character in the book and wanted to see if he would manage to change his status at Dead School and move from Slider (read: bad boy) to Riser. Of all the characters in the book, I felt Mars had the most depth, was the most likeable, and had the greatest sincere desire to change his circumstances. Ultimately, many of the characters felt flat to me. I honestly didn’t really care what happened to any of them, except for Mars.
Which leads me to my biggest issue with this book: I didn’t really like the protagonist, Jana. She was selfish in the extreme and to be honest, although Russell laid the groundwork for Michael, her boyfriend, to be the only support system in her life, I struggled to believe that she really thought killing him was the right thing to do. I know, I know. There are loves that twisted out there, but I just wasn’t buying it. In addition, she had some very annoying and repetitious sayings that just didn’t feel genuine. Seriously. How many teenage girls skip profanity in favor of phrases like ‘farts, fudge, and popcorn’? Also, I’ve never met a teenage girl (and I know plenty of them) who would introduce themself as ‘Webster, of Webster and Haynes’. Sounds like a law firm, right? I hate to say it, but I couldn’t help but think this was a middle aged males’ perception of teenage girls and it just didn’t resonate with me.
Other things that irked me (spoiler alert): There were apparently very few virgins among the teen population. Believe me, I understand that teens have sex, but the numbers felt extremely skewed. Lastly, when Michael finally showed up at Dead School (after killing his girlfriend – even if it was an accident – and after dying while attempting to kill her again) he was a Riser. I’m no expert, but it seemed like he should have been a Slider and the lame excuse that attempting to shoot Jana and her friends was self-defense didn’t make it any more plausible. The logic here just felt fundamentally flawed.
I know my review of this book is in the minority, but it just didn’t work for me. While it had some good points, I just didn’t connect with the storyline or the characters in the way I had hoped to. For those of you who have it on your TBR list, don’t let my review discourage you. I’ll be interested to see what you think!

(Am I the only one who has a hard time believing this? The crazy weather this week has me seriously doubting the accuracy of this stat. Maybe I too can claim to be right 85% of the time!)
Anyway, I hope everyone had a wonderful Easter with friends and family!  I had the opportunity to sneak away for a few days of much needed R&R with the Atlanta family and have been doing a lot of editing and reading (both of which have kept me from blogging). I’ve reached what I’ll call the ‘final’ version of my manuscript, but find myself with many questions (or maybe it’s really just self-doubt). Is my story good enough? Are the characters well developed? Should I make another pass at it? I guess the reality is that I may never know for sure since opinion is subjective and it’s difficult to really pinpoint what makes one book a success over another.
However, I’m really lucky to have a couple of very vocal beta readers for whom I’m grateful (although sometimes I secretly wish they were a little harder on my work). It’s difficult not to read professionally published books and compare. Every now and then I come across a passage that I wish I’d written. You know the kind. The ones with amazing imagery that yank you head over heels into the story. Or the ones that leave you depressed. Not because the story line is sad but because they’re over.
I’ve also been reading a lot of independent books lately which are self-published. It’s been both inspiring and eye opening. First and foremost, I commend each of the authors who’ve had the courage to self-publish, making their work available to the masses when traditional publishing houses have opted to pass. Not only do I find the stories refreshing, the price points are right ($0.99-$2.99).
Never read an indie author? You should. They’re everywhere. There are a lot of good stories out there that I would have otherwise missed. They’re easier to find than you might think (check out my links). Indie books are available on Amazon, Barnes & Noble, Smashwords, you-name-it. Yeah, there’s some crap, but that’s where the reviews come in handy. I’ve been pleasantly surprised at the organization and depth of some of the books.
In fact, I just read Fire Burn and Cauldron Bubble, a paranormal romance, by H.P. Mallory. I’ll be the first to admit that I’m not always the most discerning reader, but I’d give it 4 out of 5 stars. Good plot, fluid story line, no WTF moments. All in all, a good read. Yes, it’s light and fluffy, but I wouldn’t expect anything different from PNR.
I found the book on GoodReads.com. If you’re an avid reader, I highly recommend checking out the website. Frankly, I wish I’d found it sooner. It’s a great place to find new authors, new releases, and to just generally talk books. I’m a little shy about chatting on-line, but love having the ability to get reviews for books from trusted sources. Especially books I’d never find on the shelves of the evil-empire (or other big box stores) in the face of diminishing bookstores.
Read anything good lately? Leave a message below. I’m always looking for new series and authors!
Last, but not least, I want to thank everyone for the editor recommendations. I appreciate the help and will likely be pursuing a few of these options in the coming weeks.
J.J. Bonds

J.J. Bonds is an independent author who writes Young Adult Paranormal Romance & Urban Fantasy. She is the author of the bestselling Crossroads Academy series. J.J. lives in Carlisle, Pennsylvania where her obsession with all things paranormal keeps life interesting. She lives with her husband, daughter, and one rambunctious K9. Loves Buffy, Mexican food, and zombies. Sings off-key.