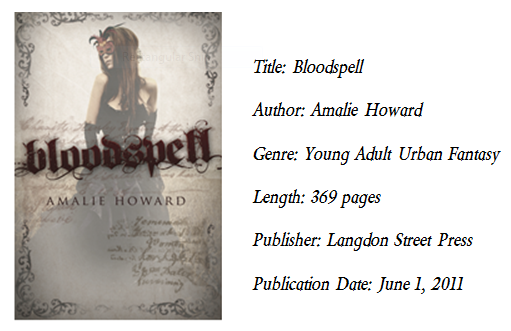 The spell was simple …

Cruentus Protectum. Defend the Blood.
But what do you do if your blood is your enemy?
Victoria Warrick has always known she was different. An outcast at school, she is no stranger to adversity. But when she receives an old journal for her seventeenth birthday, nothing prepares her for the dark secrets it holds—much less one that reveals she’s a witch with unimaginable power.
What’s more, when she meets the dazzling but enigmatic Christian Devereux, she has no idea how much her life is about to change. Enemies will hunt her. Friends will turn on her. The terrible curse that makes her blood run black will stop at nothing to control her. And Christian has a sinister secret of his own …
Without knowing whom to trust, can Victoria survive her blood’s deadly desires? Or will she lose everything, including herself?

So, I was on vacation last week and found myself sitting by the pool with nothing to read and an appetite for something deliciously paranormal. Based on another blogger’s recommendation, I downloaded Bloodspell by Amalie Howard on my Kindle. I needed a good book and all the ones I really wanted (read: hopelessly lusting after for months) hadn’t been released yet.
I was a goner when I saw the cover for Bloodspell. It totally sucked me in. Isn’t it lovely? Mysterious? Unique, even? I thought so. And I’m happy to say that this book delivers. Maybe I was a little stingy with my stars when I rated this one (I gave it 4/5 on GoodReads), but Amalie Howard’s world of witches and vampires was not only unique, it was enthralling. I loved that this story played on what we already know about these paranormal beings (without reinventing the genre), but that it also had a unique spin.
Victoria’s transformation from start to finish was real—and it wasn’t just her magic that changed her. She made a choice, a conscious decision, to change from the weak, cowardly girl we meet in chapter one into someone more. She chooses to take control of her life and reshape the way the world views her the old fashioned way—with a new haircut, better clothes, and a more outgoing personality. So maybe she doesn’t have a good firm grasp of her magic from the start, but that’s what makes it a great story; there’s continual growth on both a personal and a paranormal level.
Victoria’s cursed blood was refreshingly original and chilling. Her struggle to overcome the dark desires of her legacy had me on the edge of my seat… wanting more. Her relationship with Christian was heartfelt and though often troubled, I was beside myself to find a heroine who acted her age (yes, she occasionally did things to just spite him) and who stood her ground (thankfully she didn’t spend all of her time pining over him either).
Bloodspell was full of action from start to finish and while some of the plot twists were bordering on predictable, the likeable characters and fast past made it forgivable. If you like paranormal romance, insurmountable odds, betrayal, and ferocious fight scenes, this book’s for you. As for me, I can’t wait to see what Howard writes next!
Snapple Real Fact #   :
(I know what you’re thinking: Why is my Snapple Real Fact at the end of the post today? And more importantly, where the heck is it? This Real Fact is brought to you courtesy of Mexico. That’s right folks. You’ll pay $3.72 USD for a 16oz bottle of Snapple south of the border, but don’t expect to find anything under the lid because you’ll be deeply disappointed!)